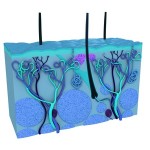 Although fibrofolliculomas and trichodischomas are the most common skin lesion BHD patients get, several other types of skin lesion have been seen. These lesions are either common in the general population, or there have only been one or two BHD patients reported to have these lesions, so it is not clear if they were caused by BHD or just coincidence.

These are commonly known as skin tags, or soft fibromas. Several case studies have described BHD patients with acrocordons. However, acrochordons are very common in the general population and up to 3 in 5 people have them by the time they are 70, meaning that these cases could just be coincidence.

They are called skin tags because these hang from a stalk of skin tissue. They may be found on the eyelids, neck, in the groin, near the armpits, chest or in areas where there are skin folds.

Acrochordons are benign and are normally the same colour as your skin, but they can also have a mottled appearance.

Angiofibromas are reddish, brown or flesh-coloured papules. They are made up of fibrous tissue and are usually found on the nose and cheeks. They are histologically similar to trichodiscomas.

Angiofibromas have been found in a few cases of BHD, but are much more common in patients with tuberous sclerosis complex, and Multiple Endocrine Neoplasia Type I.

Lipomas are fatty lumps under the skin. One BHD patient has been reported to have multiple lipomas and angiolipomas (lipomas that have blood vessels).

One study found small papules on the lips, gums, and the inside lining of cheeks and lips, in several BHD patients.

Perifollicular fibromas may be a variant of fibrofolliculomas. They are the skin coloured dome-shaped papules usually found on the face or neck.

There have been isolated reports of BHD patients with basal cell carcinoma and malignant melanoma. However, skin cancer is very common, so it is likely that these cases are coincidence and that BHD patients do not have a greater risk of developing skin cancer.