Rag family GTPases are heterodimers that cycle between an active and inactive state. In the active stimulating state, GTP is bound to RagA or RagB in mammals, or Gtr1 in yeast, and GDP is bound to RagC or RagD in mammals, or Gtr2 in yeast. Regulating and maintaining these GTP/GDP associations relies on interplay between distinct Guanine nucleotide Exchange Factors (GEFs) and GAPs.

Péli-Gulli et al. used co-immunoprecipitation assays to confirm direct binding between Lst4 and Lst7.  They showed that, under normal conditions, the Lst4-Lst7 heterodimer is mostly cytoplasmic, but that during amino acid starvation is rapidly recruited to the vacuolar membrane where it is adjacent to, but not associated with, Gtr2. Following amino acid readdition, Lst-4-LSt7 interacts with Gtr2, TORC1 is activated, and Lst4-Lst7 is released from the membrane (Figure 1). Additional TORC1 activity inhibits Lst4-Lst7 localisation to the vacuolar membrane, creating a negative feedback loop. Lst4-Lst7 is a Gtr2-specific GAP and cannot stimulate Gtr1 GTP hydrolysis. 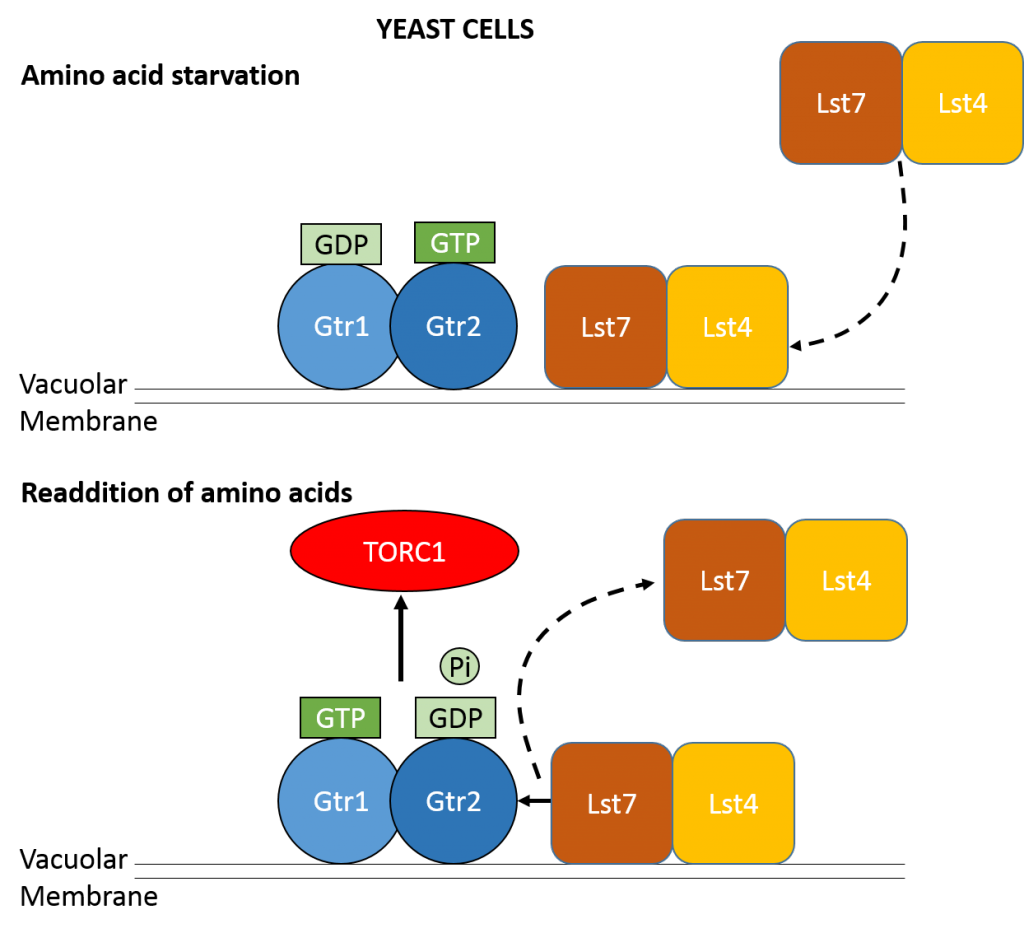 Figure 1: In yeast cells Lst7-Lst4 is recruited to the vacuolar membrane during amino acid starvation. Following readdition of amino acids Lst7-Lst4 act as a GAP for the GTPase Gtr2 stimulating hydrolysis of bound GTP to GDP. The Rag GTPases can then stimulate TORC1 activity. The Lst7-Lst4 heterodimer is then released into the cytoplasm.

Figure 2: In mammalian cells FLCN-FNIP2 is recruited to the vacuolar membrane during amino acid starvation. Following readdition of amino acids FLCN-FNIP2 act as a GAP for the GTPase RagC stimulating hydrolysis of bound GTP to GDP. FLCN-FNIP1 are a GEF for the GTPase RagA or RagB facilitating the release GDP and binding of GTP. The Rag GTPases can then stimulate mTORC1 activity.

The distinction between FNIP1 and FNIP2 in these complexes could explain the different functions with specific Rag family GTPases. In addition different FLCN domains might be associated with different functions: the C-terminal of FLCN contains a DENN domain (Nookala et al., 2012), a domain typically found in GEFs, whilst Tsun et al. showed that it was the N-terminal domains of FLCN that were required for GAP activity. As the yeast FLCN orthologue Lst7 does not contain the DENN domain, and Lst4 is the only identified FNIP orthologue, it may be only the role for FLCN-FNIP as a RagC/Gtr2 GAP that is conserved.

More research is required to determine how these roles for FLCN and FNIP in regulating amino acid induced TORC1 signalling are related to BHD pathology. Further understanding of the impact of FLCN loss on this regulation and the effects on cell growth could identify new research avenues and therapeutic targets.